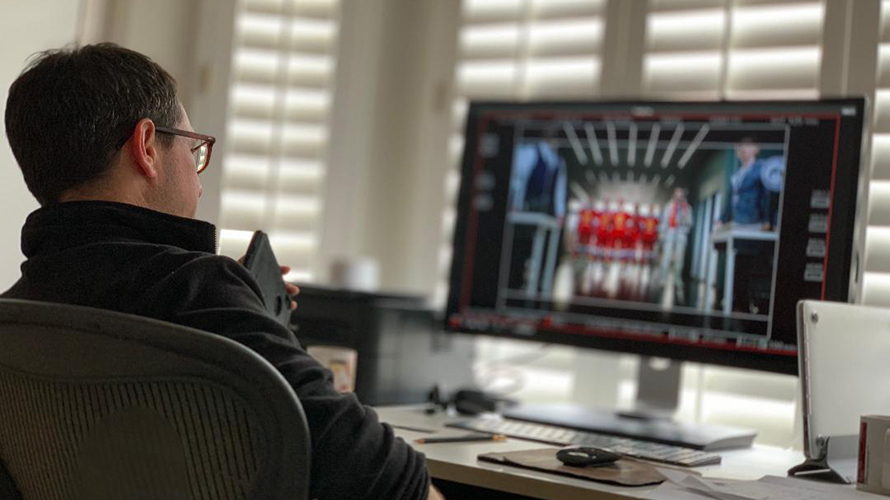 As the Covid-19 pandemic began to take root around the world earlier this year, Los Angeles-based director Brad Lubin learned he’d been hired for a Russian beer campaign set to shoot in Moscow.

Thinking it might be his last chance to work for a while, Lubin accepted the gig and started creating storyboards for Baltika Brewery and agency Slava Moscow for a space-themed spot starring pro hockey players. He also bought international health insurance to cover illnesses, including a potential coronavirus infection, and learned to say “allergic to penicillin” in Russian. Meantime, a Kia ad he’d been scheduled to direct in Germany was canceled, and U.S. commercial production was grinding to a halt. Bucking the global trend, Russia remained open for business.

“So much of what a director does happens when the camera’s not rolling.” —Brad Lubin, director

But that was soon to change. While Lubin checked off preproduction duties from his home in the San Fernando Valley, foreigners were abruptly barred from traveling to Russia. He would have to direct remotely, though the cast and crew would be able to assemble in Moscow. Then the situation got even more intense, as the crew learned a lockdown was looming for Russia, meaning that a two-day shoot would have to be compressed into less than 24 consecutive hours.

The unprecedented shoot that followed would prove to be a crash course in directing at a distance—of more than 6,000 miles— for Lubin, an industry veteran who’s worked on brands like Staples, Burger King, Ford, Mentos and Squatty Potty. He shared with Adweek a few of the lessons he learned and thoughts on what he’ll likely do differently in advertising’s new-normal world. Let’s start at the end by watching the final spot, then get into Lubin’s takeaways.

1. Technology is vital, but an audio link is the No. 1 priority

Lubin used a combination of Skype, Zoom, Google Meet, a digital video software app called QTake and his trusty iPhone to take him from early stages like storyboard approval to shooting, then to editing the content. “If you have no voice communication, you’re done. They may not need to see your face the whole time, but they have to be able to hear you.” —Brad Lubin, director

Next time, he says he’ll try to secure a production monitor to have at home so he can get a sharper, more foolproof view of what the camera picks up on set. The ability to beam himself to Moscow via video feed was a nice-to-have, he said. What was nonnegotiable? A constant, reliable audio link. “If you have no voice communication, you’re done,” he said. “They may not need to see your face the whole time, but they have to be able to hear you.”

2. Keep the momentum going, because you never know

Conditions can change on a dime—look no further than some cities’ phased reopening, followed by new rounds of Covid-19 related closures—so efficiency is more crucial than ever. Lubin, realizing he likely had limited time to shoot the Baltika ad, kept the action moving as swiftly as possible. “You can’t get comfortable, not even for a minute,” he said. “You need to get the film in the can, so to speak.”

3. Be ready for the situation to turn on a dime

Like many advertising pros, Lubin is accustomed to working on location (he logged 60,000 frequent flier miles in 2019), and jet lag can be debilitating. Even without the plane travel, he needed to reset his body clock for Moscow time, which is 10 hours ahead of L.A. He started by going to sleep and waking up a few hours earlier each day in the lead-up to the shoot. Eventually, he got himself on an afternoon-to-late-night sleep schedule so he could be alert during the wee hours of Pacific Time. Nothing quite prepared him, though, for what happened during Hour 10 of the first shooting day (of the planned two-day shoot). That’s when the production team learned it would soon to shut down to comply with Russian president Vladimir Putin’s imminent quarantine rules.

The crew was forced to pull the equivalent of a college all-nighter, rounding up the hockey player-actors and working straight through the next 12 hours to finish before the official lockdown began.

Lubin, determined to get the footage he needed, took B vitamins and snacked on protein (an entire jar of almond butter), while trying to “stay hydrated and preserve brain power.” At some point, around Hour 18, he traded mini meditation sessions for shots of espresso. In solidarity with those on set, “I had to push through the fatigue and sound enthusiastic and energetic,” he said. “I think this helped because nobody wants to be the weak link. Plus, they’re Russians; I didn’t hear a single complaint the entire shoot. I sure as hell wasn’t going to let the first one be from me.”

No matter how good the Wi-Fi, it can’t give directors the tactile experience they’d have from physically being present. There’s no way to walk around and scope the best angles. There’s no side-by-side collaboration with the cinematographer or brainstorming over beers with the creatives. There’s no relationship-building with the actors, who are relative strangers since a remote director isn’t in the casting room. There’s no real way to lead by example. That’s a downside that, unfortunately, can’t be overcome. “You want the cast and crew to see your professionalism, your work ethic, your positivity,” Lubin said. “Interpersonal communication like body language and looking people in the eye is so important, and it’s just not possible.”

Because most filming had already stopped by mid-March, top-notch, locally based professionals were available, so the Baltika job snagged a high-profile cinematographer, production designer and editor. And in case of tech failure, the production also landed an experienced back-up director.

Even with the cream of the crop on location, Lubin made sure he could watch what was happening on set—not just during filming but also between takes. (Wide lens is best for the latter.) That way he could answer questions or catch small details, like an actor wearing the wrong outfit or carrying an unapproved prop. “So much of what a director does happens when the camera’s not rolling,” he said. “I wouldn’t want to dissuade anyone from directing remotely. But you need to know what you’re up against, and you have to go in with a very clear battle plan.” —Brad Lubin, director

6. Make time for a virtual rehearsal

Lubin wishes he could have had a virtual rehearsal with the talent, perhaps the day before shooting. Doing so would’ve allowed them to get grounded in the material and have a chance to interact with him and each other. It’s an approach more closely associated with shooting a feature film than a typical commercial, but Lubin sees it as a way to establish trust and substitute for the interpersonal connection that would’ve taken place on set. It’s also part of priming a well-oiled machine from a distance, which is far more complicated than it may appear. “I wouldn’t want to dissuade anyone from directing remotely,” he said. “But you need to know what you’re up against, and you have to go in with a very clear battle plan.”

Read the full article at Adweek